In May 2021, the Finance Minister and Minister of Finance and the Minister of Commerce and Consumer Affairs announced the 6 KiwiSaver providers who will offer default fund services from 1 December 2021.

The Financial Markets Authority (FMA) - Te Mana Tātai Hokohoko has published the below information to show the progress and conclusion of the transition.

The information refers only to ‘non-active default members’ - members who were allocated to a default fund and by the time of the transition (1 December 2021) had not made an active choice about their KiwiSaver provider. As some providers maintained their default status (BNZ, Booster, Westpac and Kiwi Wealth/Kiwibank), some members’ investments were only switched to a new fund within the same provider. Members whose provider no longer had default status were transferred to a new provider and switched to the new fund settings.

About the new default funds
The new settings mean KiwiSaver members in default schemes will pay lower fees across the duration of their investment and benefit from a balanced rather than a conservative risk profile, enhanced service levels, better member engagement and fossil fuel exclusions. The benefits of the changes were set out in a Ministerial media release at the time. 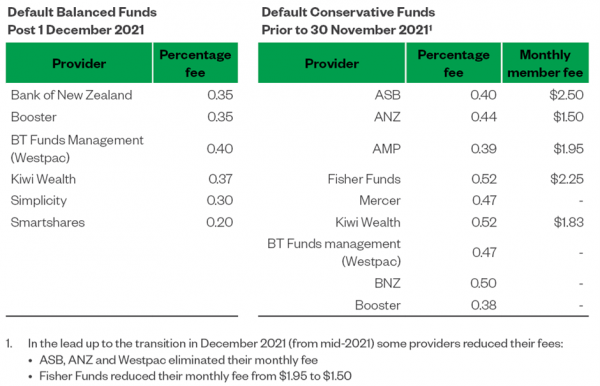 ¹ Note: In the lead up to the transition in December 2021 (from mid-2021) some providers reduced their fees:

Reconciling default members and funds under management (FUM)
The data shows an orderly transition of 305,089 KiwiSaver default members and nearly $2.8 billion in assets (the total of all switched and transferred balances), due to a competent, collective effort by default providers and the Financial Services Council, overseen and coordinated by Inland Revenue, MBIE and the FMA. 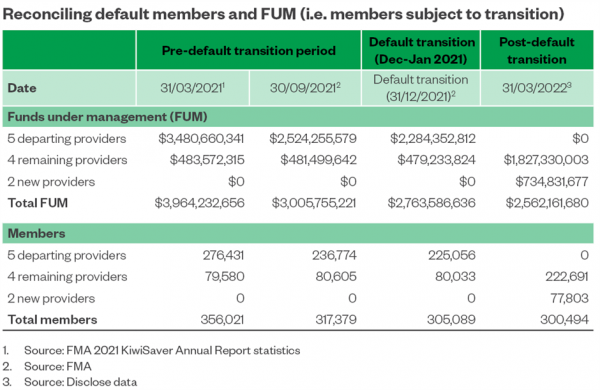 FMA monitoring, post-transition, will shift to default reporting requirements. This will include how attractive the settings of the new default funds are proving to active choice members – acknowledging the default funds were specifically designed to be open to all members.

Costs of the transition
The costs of the transition itself were minimal, particularly viewed relative to the long-term benefit of being in a balanced rather than a conservative risk profile, lower fees, fossil fuel exclusions and enhanced member engagement requirements. 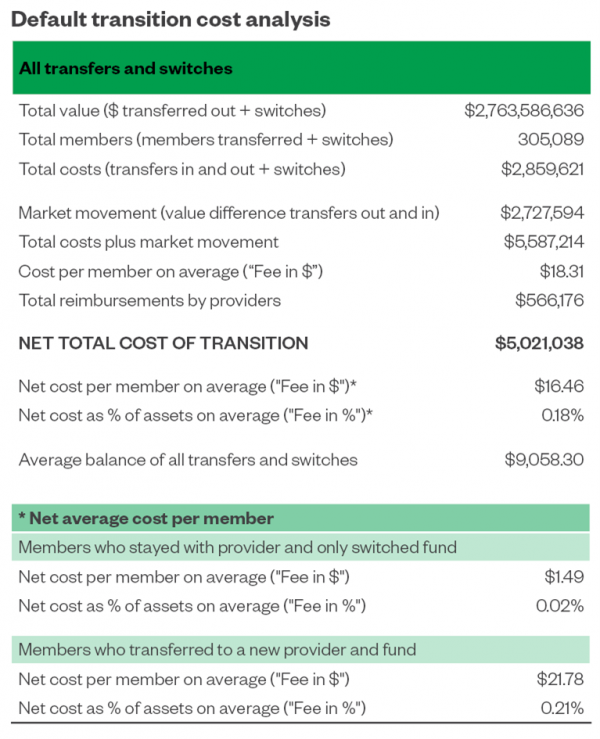 The total cost of just under $5.6 million (arising from transaction costs and market movement) was offset by many of the providers choosing to reimburse $566,000 of the cost of transfers and switches. This resulted in a final, average cost to each transitioned member of $16.46 per member or 0.18% of the average transitioned balance of $9,058.30 (both transfers between providers and switches within continuing providers).

This is a one-off cost set against the longer-term benefit of lower fees, and exposure in a Balanced risk setting to a higher level of growth assets, which is expected to deliver higher balances over time, when compared to the previous Conservative risk settings.

None of the new funds charge a monthly membership fee, which under the old funds ranged from $18 a year to $27 a year (where charged and taking into account the fee changes referred to in the above footnote).