The Financial Markets Authority (FMA) – Te Mana Tātai Hokohoko – has released its KiwiSaver Annual Report based on providers’ statistics for the year ended March 2021, which shows total funds under management reached $81.6 billion, or double the $40.8 billion held in 2017.

In an unusual year for market performance, following the late-March 2020 downturn due to COVID-19, the sharp market rebound in the year to March 2021 resulted in investment returns skyrocketing to $13.2 billion – a dramatic turnaround after the previous year’s $820 million loss.

Paul Gregory, FMA Director of Investment Management, said: “The last year was momentous for KiwiSaver, with unprecedented growth after weathering market difficulties. This was also a year of significant shifts in regulatory focus for KiwiSaver providers. We published two important pieces of guidance for fund managers - one focused on the accurate labelling of funds when it comes to claims of ethical and responsible investments, the second focusing on value for money.

“Reflecting on our guidance and the Government’s changes to the default providers coming into effect in December, we believe both will improve outcomes for investors, impacts which will play out over the long term.”

Value for money, ESG investing and default provider changes
The report shows that total fee revenue (management and administration and fees) increased at a slower rate than funds under management due to the spectacular returns this year. While total funds of $81 billion grew by 31.7%, total fee revenue of $650 million was up 20.7%.

Mr Gregory said this rate of growth in total fee revenue was a function of the percentage-based investment management fees that providers take as a cut of their members’ balances, not a sign that fees charged were increasing.

“Our focus on value for money over several years has been based on providers generally not been passing on the benefits of KiwiSaver’s growing scale. More recently there are some encouraging signs: several managers have reduced their investment management percentage fees to increase the value provided to their investors. Over time we are looking to see this approach to value for money to continue, so the current trend of KiwiSaver managers as a whole earning strongly increasing income from fees should slow and stabilise.”

That trend was already evident with fixed fees, usually called administration fees, which decreased by 4.8% to almost $80.8 million, as a number of KiwiSaver schemes reduced them or changed their structure. “This is appropriate, as these fees were only intended to help providers cover costs in KiwiSaver’s early stages,” Mr Gregory said.

The Government’s recent changes to default providers – among them, a considerable reduction in fees (including no fixed administration fees) and improved member engagement - will provide significant value to the 356,021 people in default funds, Mr Gregory said. “Because of this, part of the FMA’s future focus on default funds will be whether any moves by default members out of their allotted default funds is in those members’ interests. We will also be reviewing how many active members join the default funds, attracted by the lower fees and balanced fund risk setting.”

The report shows only a small minority of investors are choosing funds explicitly labelled as responsible or ethical, however a broad range of research shows that many investors are increasingly expecting that their provider will be taking a responsible approach to investing their money. FMA’s research has shown that 31 of 37 schemes claim that they consider aspects of responsible, ethical or ESG investment in their decision-making.

Investor focus, fund switching
There were 377,895 fund switches during the year, which was down 9.3% on the year before (due to it covering the volatile February-March 2020 period) but still 57.2% higher than the more ‘normal’ year ended March 2019.

FMA-commissioned research by PwC found younger people and members of bank-run schemes drove the higher level of switching. Concerningly, the research found fewer than 10% of those who switched to a lower risk fund during February to April 2020 returned to a higher growth fund by August, meaning 90% effectively locked in their losses. Fund switching data suggests many remain in conservative funds.

As part of its investor focus the FMA undertook its annual campaign in May 2021 to encourage KiwiSaver members to engage with their KiwiSaver statements, and to take action to improve their settings. The campaign again encouraged members to “take a looksee” at their statements, with a call this year to “check you’re in the right fund for you”, aimed at younger members in particular. 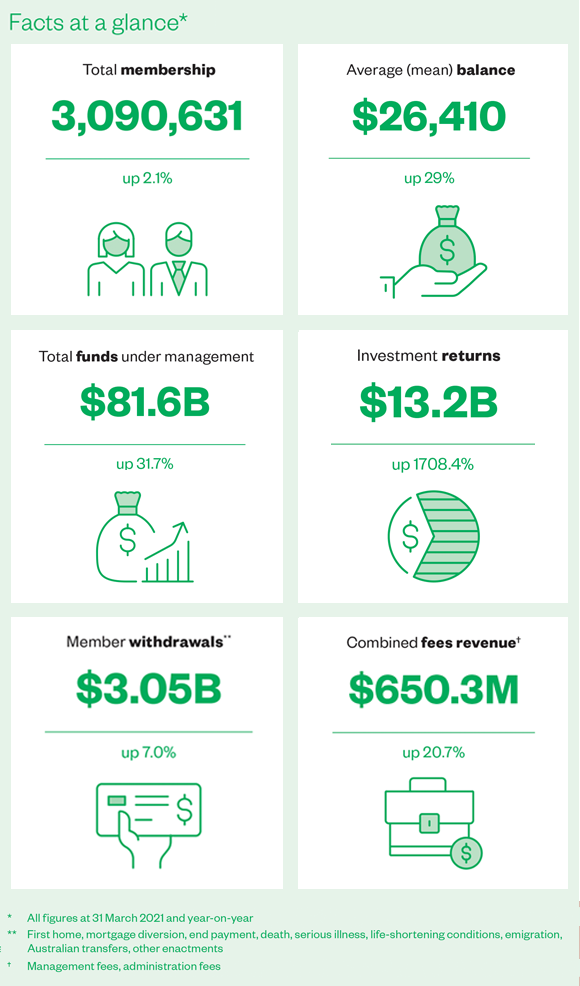