Here we provide answers to some of the common questions about the financial advice changes. We cover legislation, licensing and how to request information. If you can’t find the answer you need, please email [email protected].

A: We will continue to accept applications for full licences at any time. However, if you’re a transitional licence holder and you want to continue providing financial advice services under your own licence from 17 March 2023, you must apply for a FAP full licence as soon as possible to ensure it is processed by the time your transitional licence expires at the close of 16 March 2023. Note that the turnaround time for processing applications is up to 60 days and we are closed for the summer holidays from 20 December 2022 to 9 January 2023 and will not be processing any licence applications during this time.

A: Download our 8 steps to applying for a FAP full licence action plan for an overview of the steps required.

Our licensing team is also available to help. Please contact us.

A: From 17 March 2023, anyone who provides financial advice services to retail clients must either hold, or operate under, a Financial Advice Provider full licence. If your FAP full licence is not processed in time, you will need to temporarily stop providing advice. We recommend you have a contingency plan in place. This may include having another licensed financial advice provider provide support to your clients. Note that the FMA will be actively monitoring the licence status of all financial advice providers. To continue providing a financial advice service from 17 March 2023 you must either hold a full licence or operate under someone else’s licence. After this date, the FMA may take enforcement action in relation to any non-compliance.

A: Email our Licensing team to request that they withdraw the full licence service from the FSPR.

A: Contact the Financial Advice Provider to check you’ve been included in their application for a full licence and that everything’s in order for when your transitional licence expires on 16 March 2023.

For more information, see what it means to be an Authorised Body under a FAP licence.

A: We currently aim to respond to applications within 60 days. However, this timeframe can change at any time depending on the volume and complexity of applications being submitted.

By submitting their application well before 16 March 2023 applicants give themselves the best chance of ensuring their full licence is processed before their transitional licence expires.

A: A Class 1 licence is intended for sole adviser practices. You’ll need to apply for (and hold) a Class 2 licence before you bring other advisers under your licence. For more information, see How the FAP licence classes compare pdf.

Or explore your options to see which licence class is right for you.

A: Financial advice providers giving advice to retail customers need to either hold a licence or be an authorised body under a licence. 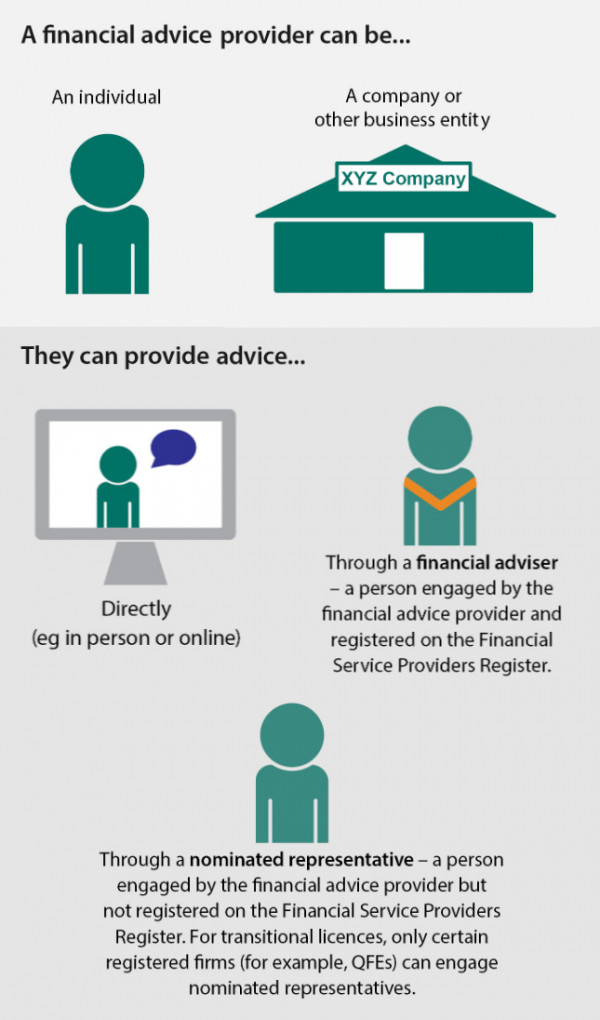 If you provide advice to wholesale clients only, you do not need a licence but certain duties still apply – such as the duty to give priority to your client’s interest when there is a conflict, and to exercise care, diligence and skill when giving advice. For more information, see Who needs a licence.

A: A full licence is a licence you must have before your transitional licence expires if you wish to continue providing regulated financial advice to retail clients.

If you are not applying for your own full licence, you must operate under another financial advice provider’s licence.

There are three classes of FAP full licence.

Once granted, full licences are subject to seven standard conditions, as well as any specific conditions added to a licence, and any conditions under the FMC Act and FMC Regulations.

A: Applications are made online.

Before you begin, watch the video tutorial or read our FAP full licence application kit to see what questions we’ll ask.

You’ll need to know which licence class you’re applying for and have an updated FSPR registration.

Once you’re ready, and have a Real Me Login, you can proceed directly to the FMA portal and apply for your full licence.

You don’t have to complete your licence application in one sitting. Complete what you can, then save a draft, and return to it when you’re ready.

See How to apply for a full licence for more information.

A: Unlike a transitional licence, a full licence has no expiry date unless the FMA specifies one, you give notice to cancel your licence, or the FMA withdraws it.

A. If any of your information changes after you have submitted your application email us the details, including an explanation of the change(s) and we will advise if we require any further information or if an additional fee applies. Email us about changing submitted information at [email protected].

A: No – Financial Advice Provider licences cannot be transferred.

A: The new regime started on Monday 15 March 2021. See the Ministry of Business, Innovation and Employment’s timeline for more information.

A: The legislation requires financial advisers to register on the Financial Service Providers Register, whereas a nominated representative does not need to.

About the competency requirements

A: The standards of competence, knowledge and skill you must meet are set out in the new Code of Professional Conduct for financial advice services.

A: There are a number of Tertiary Education Organisations (TEOs) that offer this certificate. For more information about what the certificate covers, and for a list of NZQA-approved providers, see the Skills NZ website.

A: You can email [email protected] or call us.